These issues include erectile dysfunction, penile curvature (Peyronie’s disease), loss of penile length, lack of ejaculation and/or orgasm, and loss of urine during sexual intercourse.

Penile rehabilitation is a term used to describe the use of a specific therapy to improve and facilitate an earlier return of penile erection, and prevent the development of cancer treatment-related male sexual dysfunction. Studies have confirmed that the earlier the erectile dysfunction is treated, the better the chance of a return of erection and preservation of penile size and shape.

Professor Chung holds numerous distinguished posts in various organisations including the Chair of the Prostate Cancer Survivorship for Sexual Health, Function and Rehabilitation committee at the International Consultation on Sexual Medicine, the peak authority body for the International Society of Sexual Medicine; the Secretary-General for the Asia Pacific Society of Sexual Medicine; and past Chair of the Andrology section in the Urological Society of Australia and New Zealand. He has published several clinical guidelines on penile rehabilitation (see below) and is considered the leading authority in his field in Australia and around the world. He has been invited to speak on sexual health and rehabilitation strategies at numerous major international and national meetings as well as consultative role in governmental bodies. 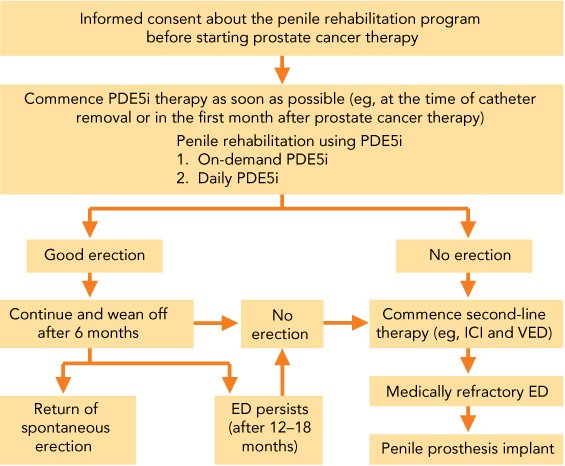 What is your option?

Oral tablets such as Viagra®, Levitra®, Cialis® and Spedra® are only effective if the underlying erectile nerves are normal (not traumatized by surgery or affected by radiotherapy). Injection of erectile agents into the penis and/or the use of vacuum penile pump device can assist your erection too. Penile prosthesis implant should be considered when it is apparent that there will be no return of natural erection and you achieve unsatisfactory erection with medical treatment. The role of regenerative medicine such as shockwave technology, stem cells and platelet-rich plasma as well as nerve transfer, is considered largely experimental with questionable outcomes in the setting of men with erectile dysfunction related to prostate cancer treatment.

Some of the key articles published by Professor Chung